skip to main | skip to sidebar

He's just Not that into Me!? 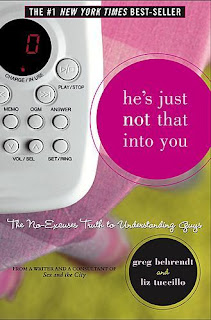 I watched the movie first, loved it, and then read the book. It truly is the perfect handbook to keep around when you're trying figure out guys, their actions and well, lack of them. Now at that time, I just read the book 'coz it was a good read; I didn't really need answers to any questions of my own.

Fast forward some years and here I am, trying to interpret signals from this guy, let's call him Mr. C. 2010 wasn't a lucky year for me when it came to finding love. I thought 2011 started with a bang when I (re)found (saw C's profile much before but didn't bother) C on Shaadi. This time around, he seemed quite interesting to me, and before I could think any more about it, I expressed interest in him (you know what I mean). The next day, I get the lengthiest message from anybody ever and an acceptance! He wrote well, mentioned that we had some common interests, and was curious to know whether I studied either in his or his sister's school. At the end, he gave me what I wanted - his email address to get in touch. At this point of time, I wasn't a paid member on the site so getting his contact details was a big big plus. I happily thought - Here's a guy who actually wants to take this further! I must have been at work when I checked my mails, and I couldn't wait to get back home to shoot him an email. Oh, he requested for my photo password as well. I don't believe pics should matter when it comes to forming one's opinion about somebody, specially in these kind of matters. Nevertheless, I did send him the password to view my 2 pics, none of them being the out-of-this-world kinds. I sent him a short mail later in the day, mentioned who I was from Shaadi, that I had studied in a neighboring city and wondered how to be in touch with him 'coz we are based in different continents altogether.

2 days passed by, and no reply! However, I saw that he had logged on to Shaadi both days. The weekend had arrived and I was driving myself nuts wondering why this guy didn't reply. From that message he sent me, he definitely didn't seem like the types who would just accept for namesake, then totally ignore you and later cancel interest or make you to (more or less how my 2010 went). I texted my friend about it, asked her whether I could send him another email, and she told me to forget the guy, that he was being a jerk and to move on and not let this bother me. She knew of some of my earlier disappointments; I should have listened!! I wasn't satisfied, and ended up asking 3 more people on chat in the wee hours of Sat morning; all 3 of them gave me mixed opinions. 1 of them told me that it was OK to initiate something like a chat request ("Stop acting like someone from the 18th century", were her exact words), and the other 2 told me to wait a bit (both were guys; I should have listened to them at least!!). I tried so so hard to stop myself but in the end around 4 am (whilst still chatting with one of the guys), I decided to go ahead and send C a chat request right then. My reason of thought was that maybe, just maybe, he didn't see my email and was probably logging in to check if I sent him a private message or something of that sorts (I know, silly me!).

My chat request was left hanging and never got accepted. The guy still continued to login to Shaadi every day that passed by. Still determined and hopeful, I waited till Sunday and sent him another email asking him what happened. All I wanted to know was whether he was interested or not, honestly; if he wasn't, at least I would've gotten some closure to all this. Before I forget to mention, I had found him on Facebook pretty easily after he sent me that 1st message, and realized that a college mate of mine was his very good friend/relative apparently. I, of course, didn't dare to initiate any sort of communication with either of them on that site. I found his once active blog as well (it was listed on his semi public FB profile). So, the more I got to know of him, you know, these tidbits floating on the Internet, the more I wanted him to get back to me. He seemed like quite a catch if I must say so - wrote quite well, seemed to come from a good family, looked pretty decent, had a good job, played the guitar, etc etc etc; all in all, he seemed a very well rounded person.

Coming back to where I had left off, I still got no reply to my second email. I was extremely disheartened, angry, yet still stupidly hopeful. Somewhere in my head, I kept convincing myself that maybe if he didn't receive my first email (say it went to his Spam folder or the big, bad, beastly Internet world ate it up somehow), he wouldn't have received the second one either. At this point of time, I would have willingly taken a shot at believing in the tooth fairy and Santa too! Mid-week, I decided to give it one last shot (at my expense literally), and became a paid member on Shaadi another time. (such a waste of money! ugh!) I thought about taking this step at work, didn't discuss it with anybody, and shot him a message as soon as I got access. My message read something like this:

I never heard back from you so I'm pulling off a Gigi on you now. This is not something I'd do typically but not knowing is a pain in the you-know-where.

So, did you even get my email?

Now, you must be wondering who the heck is Gigi? :) She's one of the main characters in the film "He's Just NOT that into YOU" (note the capitalization to self), the one who always misjudged signals, put herself out there foolishly, hoping each time that the guy she was out with was actually romantically interested in her. Truth be told, I didn't remember her name from the movie but just before deciding to take up the paid membership, I wiki-ed the movie up and took note of her name. I knew in my heart that I was doing the same thing as Gigi, being overly optimistic, and desperately seeking some sort of acceptance from C.

Any guesses as to what the outcome of my message was? Zilch! I login the next day and see that my message has been read, but again, not replied to.

This is the update as of today.

I think I have done everything necessary (and unnecessary) to get in touch with this guy; I am quite embarrassed at myself honestly! As it goes in the movie, Alex (Justin Long) tells Gigi (Ginnifer Goodwin) that she is the "rule", not the "exception", before falling in love with her himself. He calls her "his exception" in the end.

Watch Gigi & Alex in the movie

Of course, my life isn't like the movies; I know better now. I am still to decide whether to cancel my interest in C or just let it be. If I do cancel, do I send him a parting stinger-of-a-note, or nothing at all? I am certain that I'm not going to initiate contact with this guy again, and I keep no hope that he would later. He had his chances (4 good ones), and he never took any of them. So, was he ever into me? I guess not :| I shouldn't need a book or a movie to figure that much out, common sense is enough.

I've got 3 interests pending on that site right now. However, I've decided to take a break and not jump on this roller coaster for a little while. Although this wasn't the outcome I wished for, I find a little solace and humor in these words Gigi says at the end of the movie:

Girls are taught a lot of stuff growing up: if a boy punches you he likes you. Never try to trim your own bangs, someday you will meet a wonderful guy and get your very own happy ending. Every movie we see, every story we're told implores us to wait for it: the third act twist, the unexpected declaration of love, the exception to the rule. But sometimes we're so focused on finding our happy ending we don't learn how to read the signs; how to tell the ones who want us from the ones who don't, the ones who will stay and the ones who will leave. And maybe a happy ending doesn't include a guy, maybe it's you, on your own, picking up the pieces and starting over, freeing yourself up for something better in the future. Maybe the happy ending is just moving on. Or maybe the happy ending is this: knowing after all the unreturned phone calls and broken-hearts, through the blunders and misread signals, through all the pain and embarrassment... you never gave up hope.

I'm not giving up hope either. Someday, I know I will become somebody's "exception". :)


P.S. If you want to read up on some memorable dialogues from the movie, here you go:

He's Just Not That Into You movie quotes